Unity cannot be achieved by making a law that all shall be one. - Tagore

Hinduism has always been an amorphous religion with multiple gods, goddesses and texts and people have been free to pick and choose what they like. Ramanujan's 300 Ramayanas shows that even texts revered by many had multiple versions. There have been significant strands of atheistic thought within Hinduism and doubts and debates were common. I came across a stanza in the Rig Veda which said:


Who really knows, who can truly say

When and how did creation start?

Only He, up there, knows, maybe;

Or perhaps, not even He.

But over the last couple of decades Hinduism has been copying the characteristics of the monotheistic religions, promoting one god (ok, make it two - Rama and Krishna, specifically the Krishna of the Mahabharata not the Krishna of Bhagavata Purana), one book (Gita) and a proposal to make Ayodhya as Hindu Vatican. Many people seem to take pride in wearing religion on their sleeves characterised by the cry 'garv se kaho hum Hindu hain'. I came across a couple of paragraphs in two different books that struck a chord. The first in The Idea of India by Sunil Khilnani:


For many in India modernity has been adopted through the conservative filters of religious piety, moralism and domestic virtue.  This has spawned a novel Hinduism, where holographic gods dangle on well-used key chains and cassettes of devotional ragas are played in traffic jams: instances of a religious sentiment freed from its original defining contexts, from the subtle iconography of materials and the punctual divisions of the day into sacred and mundane time. Besides tapping the sentiments of domesticity and piety, political Hinduism also summons up the energies of the young, many of whom have drifted through India's colleges and universities (for most, an idle rite of passage rather than an education).


Hinduism as a system of religious beliefs and practices has been organised very differently from Christianity or Islam.  It has left much room for activities that might be interpreted as either religious or non-religious, according to the inclinations of the individual.  In that sense, though not in every sense, it has a closer  affinity with secularism than Christianity or Islam.  But Hinduism is changing, and one significant change is its tendency to define itself in opposition to other religions, notably Islam.

Broadly speaking, there were two views of India's past, one being tolerant and inclusive, the other being aggressive and exclusivist. Both were attempts to refute the British narrative that India as a unified entity did not exist till they arrived on the scene. This view is illustrated by Churchill's statement that India has as much claim of being a country as the equator. They claimed that in their absence, India would descend into chaos and dictatorship.

The inclusive view was propounded by people like Gandhi, Tagore and Nehru. In The Discovery of India, Nehru says that India is ' “an ancient palimpsest on which layer upon layer of thought and reverie had been inscribed, and yet no succeeding layer had completely hidden or erased what had been written previously”. He views India's past and celebrates its unique identity as a confluence of various influences which mirrors what he would like India's future to look like.

The other conception of the past was the Savarkarite view of a Hindu race joined by blood kinship. Those who had a racial connection, shared culture and had common laws and rites formed the core and others like Muslims, Christians and tribals were relegated to a secondary status. The Hindu nationalists viewed Hindus as victimised by Muslims and colonialists and laid stress on a martial patriotism as a means of righting this historical wrong.

After partition, many had a simple logic: since there was a Muslim Pakistan there had to be a Hindu India, a religious state driven by narrow nationalism. This view is characterised in the present day by the BJP manifesto of 'one nation, one people, one culture'. For the first couple of decades after Independence, the inclusive view was in ascendancy but the Savarkaite view always lurked in the background and started gaining momentum in the eighties. (It is interesting to note that Jinnah and Savarkar, who wanted a nation formed on the basis of religion were non-religious; while people like Gandhi and Abul Kalam Azad, who wanted a secular nation, were religious.)

The idea of making India a Hindu Rashtra is a mirror image of the idea of Pakistan - of a homogeneous nation created on the basis of religion, a familiar model of the Western nation-state where unity is derived from uniformity of religion, culture and language. The proponents of such a view regard internal difference as a sign of weakness. But as Sunil Khilnani points out in The Idea of India:


If one looks beneath the confusion and black arts of India's politics, one sees in its democratic experience evidence of something that James Madison and his Federalist colleagues well understood more than two hundred years ago. Large republics with diverse and conflicting interests can be a better home for liberty, a safer haven against tyranny, than homogeneous and exclusive ones.  Within them, factions and differences can check one another, moderating ideological fervour and softening power.

In a previous post, I had shown a photograph from a school picnic when I was in Little Flower School (LFS) Jamshedpur. 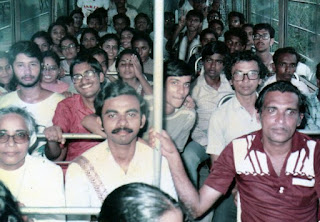 The person in front of me (in the middle wearing a white T-shirt)is Sir Joseph who had taught me Physics in Std.XI and XII. He had learnt of my stroke from a classmate of mine. When he was in Coimbatore a couple of months ago in connection with a wedding, he was kind enough to visit us along with his wife and two of of his children. Needless to say, I was delighted.

We exchanged reminiscences about our time in LFS. He told us about his interview before joining LFS and about how it came about that he had to set the question paper for selection to KG! I asked him to sing an old Malayalam song and he responded by singing a medley of the opening lines of 27 hit Malayalam songs.

A brief note about LFS: When you are young you take many things for granted and only later do you realise how lucky you were. As they say, life is lived forwards and analysed backwards. One of these lucky breaks that I had was being able to study in LFS., a fact that was brought home to me more forcefully by the idea I got of Coimbatore schools. My days in LFS with the teachers and friends there are among my most treasured memories. It was not NIT,Trichy or IIMA but LFS that had the biggest influence on me both academically and in terms of values (which I think is at least as important).