Is a 'strong' leader desirable? - I

'When people are free to do as they please, they usually imitate each other.' - Eric Hoffer

Thanks to the education system, I knew nothing about the findings in social psychology till some years after my stroke. (It takes time to detox oneself from some myths of an MBA education). And after a while, the assumption of economists that humans are rational agents started sounding like fiction. But I came across some economists like Robert Frank who says that decision making is often not rational. He says (quoted in The Emotional Brain): 'Many actions, purposely taken with full knowledge of their consequences, are irrational'. He likens many behaviours to Borges' description of the battle over Falkland Islands between Britain and Argentina - 'two bald men fighting over a comb.'

One of the powerful influences on human behavior is social conformity. We think that we make independent decisions that are not skewed by the opinions of others but that is a vain assumption. Advertisers will say that everyone is buying  their product. Politicians will say that everyone is supporting their party. They know that conformity  is a powerful instinct in humans. Politicians and advertisers have a better idea of human behaviour than economists do. The power of social influences varies in different situations.  The authors of Nudge describe its power in one such situation:

In Chronicles of our Time, Andre Beteille mentions Alexis de Tocqueville, a great 19th century writer on democracy, who viewed heroes in a democracy with misgivings. He said that there was no proper place in a democracy for heroes because when they arose, they would sooner or later turn into despots. Strong and charismatic leaders secure instant and unquestioned devotion among his or her followers and sooner or later start expecting similar devotion from everyone. Hence Ambedkar's warning in his final speech to the Constituent Assembly:


The second thing we must do is to observe the caution which John Stuart Mill has given to all who are interested in the maintenance of democracy, namely, not "to lay their liberties at the feet of even a great man, or to trust him with power which enable him to subvert their institutions". There is nothing wrong in being grateful to great men who have rendered life-long services to the country. But there are limits to gratefulness. As has been well said by the Irish Patriot Daniel O'Connel, no man can be grateful at the cost of his honour, no woman can be grateful at the cost of her chastity and no nation can be grateful at the cost of its liberty. This caution is far more necessary in the case of India than in the case of any other country. For in India, Bhakti or what may be called the path of devotion or hero-worship, plays a part in its politics unequalled in magnitude by the part it plays in the politics of any other country in the world. Bhakti in religion may be a road to the salvation of the soul. But in politics, Bhakti or hero-worship is a sure road to degradation and to eventual dictatorship.

In the 1950s a social psychologist Solomon Asch conducted experiments to get an idea about the level of conformity in people. He was trying to understand why so many good,  law abiding Germans unquestioningly followed Hitler's murderous policies. In the test people were asked to match the length of a line with three comparison lines as shown in the figure below: 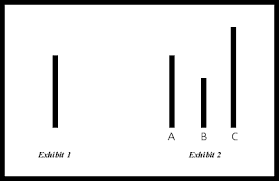 When people were asked to make a decision on their own, they invariably gave the correct answer since it was an easy test.But when in a group, the answer was often influenced by what others said. When everyone gave an incorrect answer, people erred more than one-third of the time. This conformity effect was present even when the other people present were strangers and there was no particular reason to please them. One-third may sound like a small number till you realize that the winning party in Indian elections often gets only one-third of the votes.

Such conformity experiments have been conducted in many countries and the results have been similar. The authors of Nudge write, 'Unanimous groups are able to provide the strongest nudges - even when the question is an easy one, and people ought to know that everyone else is wrong.' Elections often give surprising results because people vote individually in seclusion and in this situation, their decision often differs from what they say in a group.

In this connection, also see Milgram's experiment and Stanford prison experiment.
Posted by Suresh K at 6:46 AM