In late December last year, I attended the 25th year reunion of my IIMA batch at Ahmedabad. Jimmy Connors once said, 'The trouble with experience is that by the time you have it you are too old to take advantage of it.' This is not always true. Since I had been to Ahmedabad 4 years earlier, we were familiar with what the journey entailed so the soul-searching, preparations and tensions of last time were not present this time. (I remember another quote about the lateness of learning from experience - 'By the time you realize that your father was right, you will have a son who thinks that you are wrong.'.)

All the batch mates from my dorm (D2) attended the reunion. During our campus days, we had styled ourselves 'Enlightened Rogues'. This was a term that I had completely forgotten till I read it  in a Whatsapp message. This was the first time since our campus days that all of us rogues (enlightened ones, don't forget) were together. (A friend from D1 - which was a girls' dorm - did not fail to remind me that the enlightening was because our dorm was located next to theirs!)


Anitha, the wife of one of my dorm-mates (Sidey) has been my unofficial medical advisor for about 15 years now but we had never actually met in person. All our interactions had been through Whatsapp and email. She is from Chennai and practises in New York. Sidey is from Mumbai and works in New York. I am from Palakkad and settled in Coimbatore. Jaya is also from Palakkad and settled in Coimbatore. It must be obvious to you now that we had to travel to Ahmedabad to meet for the first time.
This being the 25th year reunion, there were many more batch mates attending than was the case last time. So I met a lot more friends who I had thought I would never meet again. As it has happened at all reunions, I was astonished at how much people could remember about various incidents that had happened in our campus days. In the Yearbook that we were given, I couldn't remember many incidents that my batch mates had described. While going around the campus, my recollection of some regular haunts was quite hazy. It was another reminder of how my life before my stroke is becoming more like a hazy dream.

Apparently, Confucius said that if a person is searching for happiness, it is essential for him to find the right chair to sit. This worthy problem has been addressed satisfactorily for a while in my case so I have to consider what else Confucius said. Unfortunately, I don’t have a clue. I am sure that meeting friends made long ago and exchanging gossip with them would have figured very high in his list.

In one of his incomparable works (I don't remember which one),  one of the timeless Wodehousian characters (I seem to have forgotten who it was), said, “One of the poets, whose name I cannot recall, has a passage, which I am unable at the moment to remember, in one of his works, which for the time being has slipped my mind, which hits off admirably this age-old situation.” I find myself in the shoes of that Wodehousian character - I am sure there was a poem which described beautifully the pleasure of meeting old friends after a long time but I am not able to recall which one it was.

I once heard Jorge Luis Borges say, 'You can read what you want but you can't write what you want; you can write only what you are able to.' It is generally agreed that I can't write a decent poem to save my life. That being the case, I will spare you the torture of reading my pathetic attempt to mimic that great poem. (It really was great, take my word for it.)

One of de riguers of any reunion is a DJ night and we had two of them. It is a time when middle-aged folks try to emulate youngsters while their amused children look on. A friend was telling us about the lunch menu at her office meetings. I forget the sequence of items but  the final course would always be thairu shaadam (curd rice). For many Tamilians, a meal is never complete without some thairu shaadam. A DJ night is the thairu shaadam equivalent of reunions. 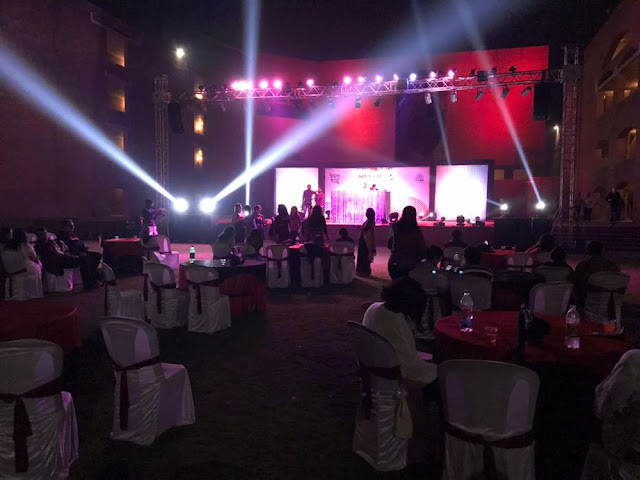 PS: In the two years that I was in Ahmedabad, I had never thought of going to Sabarmati Ashram. Over the past year, I had been reading about Gandhi and have become a big admirer so I decided to go there on this trip.