For typing with the neuro-headset, I keep an on-screen keyboard in the top part of the monitor and a notepad/word document in the bottom part of the monitor. As I move my head, the mouse-pointer moves to different parts of the screen. When it is on the on-screen keyboard, the mouse-pointer is seen as an arrow and the key on which it is present is highlighted yellow. Since the auto-type feature of the on-screen keyboard is ON, when the arrow is held on the key for about a second, the letter is automatically typed in the document. 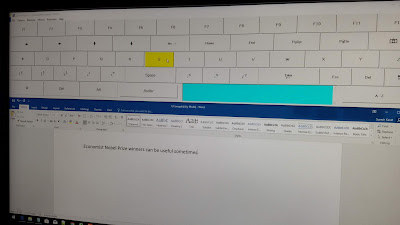 When the mouse-pointer is on the document, it is seen as a thin barely visible vertical line. 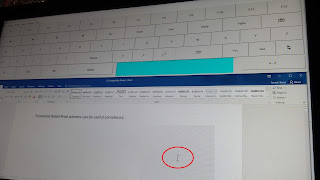 It is again seen as an arrow when it is on the icons of the various windows seen at the bottom of the screen. 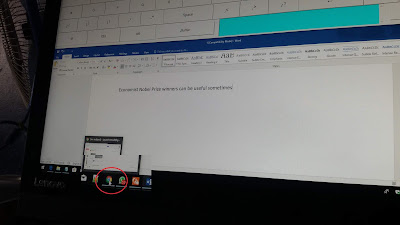 If I move the arrow a bit upwards and hold it within the small window that opens above the icon, the window opens up covering the whole screen. I can use this feature of Windows 10 to keep track of some scores. 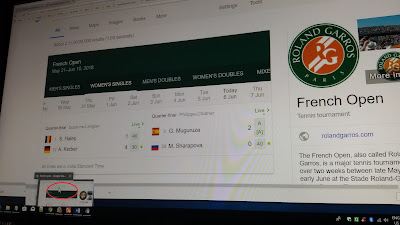 The neuro-headset communicates with a toggle that is connected to the computer. Sometimes the communication snaps and I lose control of the mouse –pointer. At these times, if the mouse-pointer is on the keyboard it will be stuck on a particular key. This will cause the letter on the key to keep getting typed in the document.  My horror scenario is if the mouse-pointer gets stuck on ’Del’ or ‘Backspace’ keys because I will then lose a substantial portion of what I have typed depending on where the cursor is located. If Jaya is around, I will alert her and she will quickly remove the mouse-pointer from the keyboard. 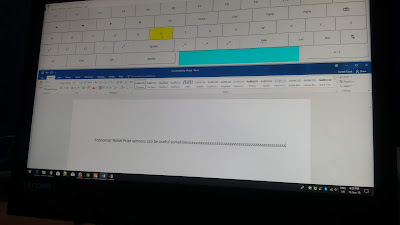 I always tell Jaya to tell the nurses what to do in such a situation but it is quite challenging to make them understand what they are supposed to do. First the nurse will have to be taught how to move the mouse. She will at times move the mouse in the air so she will have to  be be told that it has to be moved on a surface for the pointer to move. Then they will keep the mouse on the table and keep sliding the mouse over a large area with all sorts of contortions of the face and hands but the pointer will move only a short distance. But even after the nurse learns how to move the mouse, the desired results often don't come.

The cause for confusion is the fact that the mouse-pointer has different shapes in different parts of the screen. When the pointer is on the keyboard, it appears as an arrow (with the key it is on being highlighted in yellow); when on the document, it appears as a barely visible, small vertical line and it again appears as an arrow on the taskbar at the bottom of the screen. Most nurses are not able to understand that these shapes denote the same thing.

I was reading Nudge by Richard Thaler and Cass Sunstein when I got an idea. The authors say that in the men's rooms at Schiphol Airport in Amsterdam, right above the drain, a perfect drawing of a house fly is baked into the porcelain bowl. Why? Apparently, the presence of a fly in a urinal changes human behaviour. In males, there is a deep-seated instinct to aim at targets, and having a fly to aim at reduces  “spillage."

A Nobel prize-winning economist would not have imagined that his book would offer a clue that will help a patient  on the other side of the world who had suffered a brain-stem stroke. God moves in mysterious ways his wonders to perform.
Posted by Suresh K at 6:37 AM